Fascinating materials about people and performance caught my eye this week. If you work with people in any capacity, these links will interest you.

First, this fascinating essay on how creative people’s brains do work differently. It draws upon Frank X Barron’s research into creative people, that found that IQ could not explain the creative spark. The article further debunks the prevalent and common myth of the right brain as the creative brain. The whole essay is worth reading but here is a prize quote.

The creative brain is particularly good at flexibly activating and deactivating these brain networks, which in most people are at odds with each other. In doing so, they are able to juggle seemingly contradictory modes of thought—cognitive and emotional, deliberate and spontaneous. This allows them to draw on a wide range of strengths, characteristics and thinking styles in their work.

Given all that, finding the right “type” of person as an employee, a date, or a partner still remains a puzzle. One of the blunt tools often wielded in weeding out the misfits is the Myers Briggs Type Indicator (MBTI). A recent article in the FT asks — Is Myers Briggs up to the job? Tracing the history of the MBTI cult, the article mentions anecdotes about how it is being misused to reject candidates in job interviews, mergers, or dating situations, how it is being used to avoid certain work situations (such as an “I” avoiding after-work socialising), and how it could help with conflict resolution in couples. It also looks into the lack of peer-reviewed research into the popular tool and the alternatives.

Some psychologists believe that independent, peer-reviewed research in the decades since the MBTI was devised has provided something better than Myers-Briggs. They champion the notion of the “Big Five” personality traits — openness, conscientiousness, extroversion, agreeableness and neuroticism. Of these, only one trait is closely shared with the MBTI — extroversion. Myers-Briggs does not focus on “neuroticism” or, indeed, any similarly negative trait, which may point to one of the reasons why the criticisms lobbed at the test by modern science have yet to undermine its popularity.

So you found the best people for the team. Now what?

Success or failure is more complex than hiring the right person, not least because the Peter Principle. But have you interviewed the spouses? Yes, you read right — spouses. One might infer from recent research that interviewing spouses or at least knowing the set-up at home might give you a good idea of the new teammate’s success potential.

One is a diary study of dual-earner couples showing that people put more time in at work when their intimate relationships are going well, because the absence of drama at home gives them greater emotional, cognitive, and physical vigor to bring to the workplace.

The other shows that spouses’ personalities affect employees’ work outcomes — incomes, promotions, and so on. Both studies are reminders that each individual bent over each task in the office is connected to, and the product of, a social and familial context that matters a lot, and we should all be paying more attention to those contexts.

The second study is quite remarkable.

Brittany C. Solomon and Joshua J. Jackson of Washington University in St. Louis realized that a rich trove of data on thousands of Australian households would lend itself to an analysis of the effect of spouses’ personality characteristics on people’s employment outcomes, because the database included not only survey results indicating personality dimensions but also information on incomes, promotions, and job satisfaction.

The personality data covered what are known as the “big five” dimensions — extroversion, agreeableness, neuroticism, conscientiousness, and openness. The researchers found that the only spousal trait that was important to an employee’s work outcomes was conscientiousness, which turns out to predict employee income, number of promotions, and job satisfaction, regardless of gender.

Here you can see the relationships between spousal conscientiousness and income, promotions, and job satisfaction: 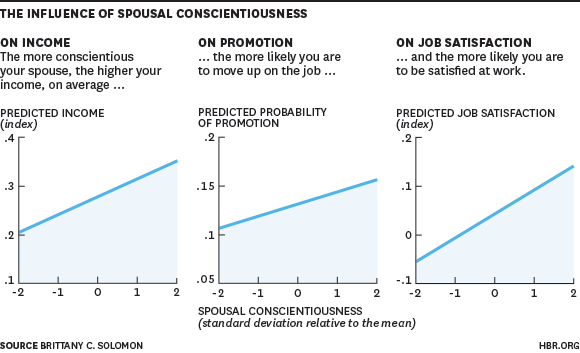 There is more. Are you an employer that wants the workplace to be a welcoming and egalitarian place for female employees? Then you will love this — or not!  Research shows a link between a heterosexual man’s marriage structure and his attitudes towards women in the workplace, including disliking their presence in the workplace and denying the women promotion opportunities.

Based on five studies with a total of 993 married, heterosexual male participants, we found that marriage structure has important implications for attitudes, beliefs, and behaviors related to gender among heterosexual married men in the workplace. Specifically, men in traditional marriages—married to women who are not employed—disfavor women in the workplace and are more likely than the average of all married men to make decisions that prevent the advancement of qualified women. Results show that employed men in traditional marriages tend to (a) view the presence of women in the workplace unfavorably, (b) perceive that organizations with higher numbers of female employees are operating less smoothly, (c) perceive organizations with female leaders as relatively unattractive, and (d) deny qualified female employees opportunities for promotions more frequently than do other married male employees. Moreover, our final study suggests that men who are single and then marry women who are not employed may change their attitudes toward women in the workplace, becoming less positive. The consistent pattern of results across multiple studies employing multiple methods (lab, longitudinal, archival) and samples (U.S., U.K., undergraduates, managers) demonstrates the robustness of our findings that the structure of a man’s marriage influences his gender ideology in the workplace, presenting an important challenge to workplace egalitarianism.

View all posts by smyogendra

Shefaly is a specialist in digital leadership and governance, organisational growth, and decision-making. She works with boards, CEOs, founders and investors.